All The News That’s Fit To Stint (Sins of Omission) 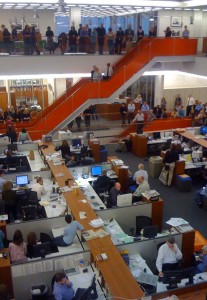 The Center for Immigration Studies provides an extended excerpt from William McGowan’s most recent, incisive analysis of the news media, Gray Lady Down, on its weblog this month.

It’s worth reading in its entirety, simply because it illustrates the failure of the mainstream news media-and particularly the New York Times, which has heretofore been the standard bearer of professional journalism in this country-to accurately and fully cover the damage done to this country by our government’s lax enforcement of immigration laws, and counterproductive, overly generous immigration policies.

It is a long read, but well worth the time, especially since so many of the newspaper of record’s critics-even those who bill themselves as conservative watchdogs-neglect to point out the deficiencies of the NYT when it comes to this issue. Although this blind spot might be attributed to careless oversight, it more than likely springs from their own sympathies for unfettered immigration and de facto amnesty.

Read the excerpted portion, then tell me what you think. I’m of the opinion that the Times has been reckless in its disregard for current immigration laws, and sensible restrictions upon immigration, especially when you consider the fact that as recently as 1989 it had reported truthfully on the disastrous results of the 1986 Simpson-Mazzoli amnesty. Like so much else during the era of “Pinch” Sulzberger, the quality and depth of reportage on the subject of immigration has declined drastically, to the detriment of the paper’s still substantial readership.

This entry was posted on January 29, 2011 at 1:31 AM and is filed under News, News and Analysis. You can follow any responses to this entry through the RSS 2.0 feed.